Here is the final profile we have for you this week – some (Damon) may say we have saved the best for last. Introducing DCCS Coordinator, Damon Herd! 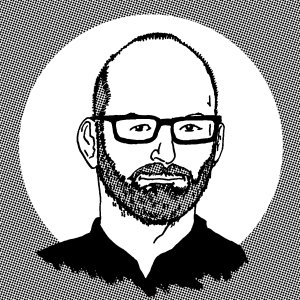 Tell us a bit about yourself.

What do you do on a day to day basis?

I’m coordinator of DCCS, so that means I have day to day responsibilities for running the space – liaising with outside organisations and partners, programming workshops for our after school clubs, and arranging artists and facilitators for our studio space.

How did you get to where you are today?

I’ve always been interested in comics, as a kid I used to draw my own Danger Mouse comics with a school friend. I would go to the local library and pour over Asterix and Tintin books. Like Phil, I also used to get Rupert the Bear books at Christmas – I think that places us in a certain age group! I had my first published drawing in issue 26 The Nutty – a comic from DC Thomson – at the age of 9. When I left school I worked as a draughtsman, when you still drew with pen on boards, and then fell into Civil Engineering. It was never really what I wanted to do though, so I eventually ended up working in a record shop in London, and then got a job in the film and TV industry. That lasted until my mid-life crisis when I went back to art school in my thirties. I studied Book Arts and then later did an MA in Illustration at Edinburgh College of Art. When that finished, I was accepted to do a PhD on comics at DJCAD. It was titled Truth Games: Fact, Fiction and Performance in Autobiographical Comics and I just handed it in a couple of months ago. As my PhD was coming to an end, the job at DCCS came up so I applied. And here I am!

What do you enjoy doing in your free time?

I’m a practising artist, I like working in screenprint and I’ve made installations and murals in the past. I also make my own comics such as The Adventures of Ticking Boy. During my PhD I conceived DeeCAP (Dundee Comics Art Performance), which is a theatrical event where we project comics on to a screen and the authors recreate or perform their comics. I also like to ride my bike – I recently combined my love of comics and cycling by doing the whole of the Oor Wullie Bucket Trail in one day on my bike! I’m also one of the regular posters at comics blog Graphixia which has a roster of comics academics, mainly from Canada and Europe, blogging on all things comics.

What is your favourite comic of all time?

Love and Rockets is probably my all time number one favourite comic, especially the stories by Jaime Hernandez. It began in the early 80s as a slightly sci-fi inflected tale of punk living in LA, but it slowly lost the sci-fi trappings and focused on the characters, who have grown older as the comic has continued over the last 30 years. I love Jaime’s black and white drawing style, he is an artist who really knows how to use black on a page. Another favourite would be Susceptible by Geneviève Castrée, her work is really delicate and beautiful and personal, but sadly she died this year. Like Norrie, I agree that the best Batman book is Batman Year One. It’s a great combination of Frank Miller’s writing, David Mazzucchelli’s art and Richmond Lewis’s colouring.

What is the best thing about working in DCCS?

Just seeing what the kids come up with during our workshops – they are endlessly inventive, some of them are really natural instinctive cartoonists and their work is always surprising. Usually there’s a good fart joke. It’s great working with artists day to day and it’s also given me the opportunity to continue creating my own work. Everything about the Space is great!

(I think he also enjoys bossing around interns.) What are you working on at the moment?

The after school clubs have been a bit quiet over the holidays but now the schools are back hopefully it will get busy again. We’re working towards getting our Comics Clubbers to produce comics so we can sell them at the Ex Libris book fair at the Dundee Literary festival in October. In a personal capacity, I’m currently guest editing the next issue of Scottish literary journal The Drouth. It’s a comics special and it’s given me great pleasure selecting artists and writers to produce strips and articles for the issue. It should be out in October and it’s going to be great!