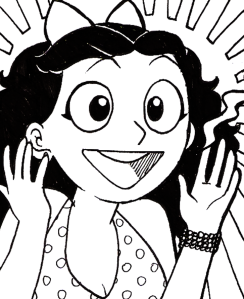 Tell us a bit about yourself.

My name’s Ashling Larkin, I’m 22 years old and I’m from Eastbourne in England.

What made you want to become an artist?

Well, I’ve read comics since I was a kid, and I was also fascinated with the art of animation. So it was a mix of reading these Brazilian comics (“Monica & Friends”) and also seeing some behind the scenes footage of how they made Snow White that kind of did it for me.

Do you have a preferred style of art?

I really enjoy drawing traditionally, because it lets me draw in lots of detail. The best way to describe my art style is probably as a mix between anime and Disney.

What do you enjoy doing in your free time?

Mostly reading comics of course, catching up on my TV shows and cartoons, and socialising – I think I’m an extrovert. My favourite cartoon show at the moment is Steven Universe and my favourite TV show is The Mindy Project.

What is your favourite comic of all time?

Well I have a favourite artist, and pretty much anything he makes is gold for me – Bryan Lee O’Malley. But my number one comic by him is Lost at Sea because it’s so emotional and it’s similar to the way I tell stories, so I guess it’s one of my influences. I love all of his work though.

What is the best thing about working in DCCS?

It’s really really great to have a dedicated space that is just for working and creating – I’ve noticed that my productivity has gotten way way higher since I’ve been here. Also the workshops are really fun and interesting, and it’s great to get a fresh perspective from the kids we work with.

What are you working on at the moment?

I’m finishing up the last chapter for my comic Fundee, and I’m also in the middle of writing The Enchanted Book – it was my fourth year [of university] film which I’m currently transferring into comic form. Those are my big projects at the moment, along with the odd commission here and there.